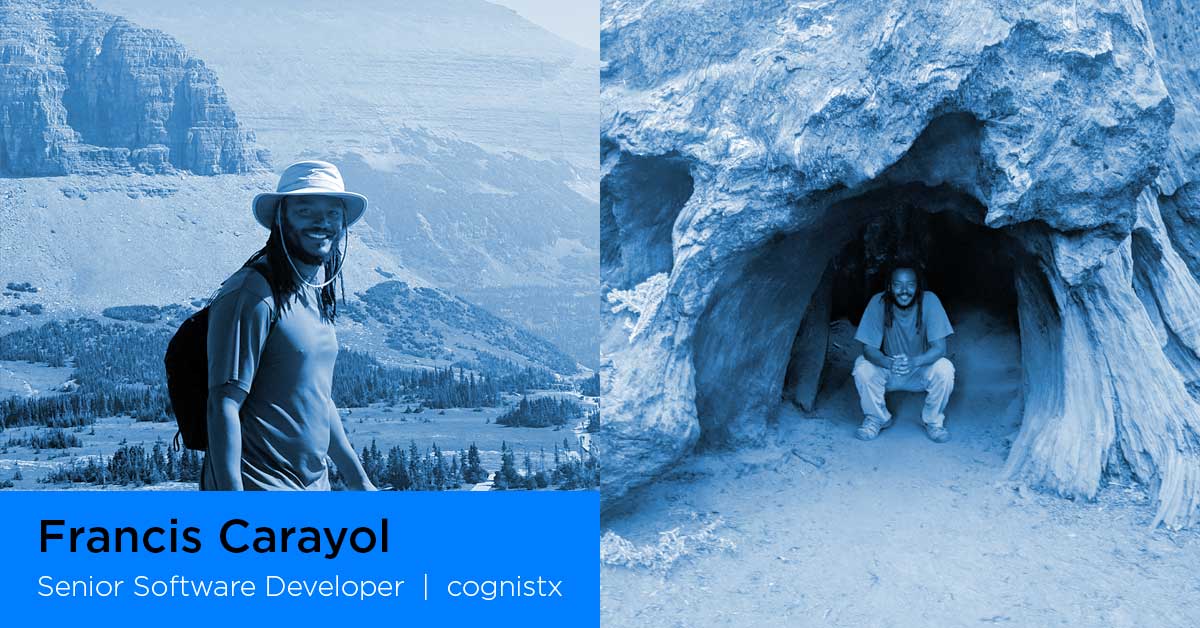 Holly Weaver and Francis Carayol chat about New Mexico, travel and the differences between American and West African culture.

Holly: Where are you located?

Francis: I live in Columbus, New Mexico. It's three miles from the Mexican border.

Do you see any political activity?

The closest large city is El Paso, Texas, and on the drive there you can see the border wall that’s being built. We have some of the workers that are staying near town as they are building the border wall.

How has that impacted the community?

At first, there was a big uprising because they had their camp in town and local residents were worried that the people coming in from out of town would bring the virus (COVID-19) here. Some protested it, so they moved them outside of the town limits. But, then that brought another argument with the business owners because they were hoping to have all of that extra business if they were right in town. You can never please everybody, so some of the business owners were very unhappy that the other town folks pushed their camp outside of the town limits.

You see a lot of Border Patrol because we are so close to the border. We have a border patrol checkpoint when you come into one of the towns and occasionally you might see their helicopter if they’re looking for somebody.

‍So, how long have you lived there?

We moved to New Mexico... let me see... we rented a place north of here for about a year, then bought our house... So, close to three years.

Where did you move from?

I don’t miss the humidity. That’s the one thing... why I fell in love with this area is because you don’t have that humidity. North Carolina is a very nice, green, pretty state, but that humidity ... I can’t deal with that humidity anymore.

Yeah, New Mexico has its own climate.

I love the art.

Yes. So, have you visited?

Yes, I came through driving from California to Pennsylvania.

Yeah, that’s where it was. It’s so original and you get such a mix of people and backgrounds.

Yes, I love the people here... the mixture. It’s a very diverse state with a lot of history.

What are some of the things unique to New Mexico that only a local would know?

One thing... and this sounds crazy... I love the food here. The food here has a lot more spice than some places. Green chiles are what we’re known for. It’s the only state where you can go to McDonald’s and ask them to put green chiles on your burger and they’ll add them to it.

It’s that unique spicy flavor here and I love that. I’m from The Gambia, West Africa originally, so I love that spicy stuff in food.

‍Tell me about West Africa. Is that where you grew up?

Yes, that’s where I was born. I lived there until 1992, then I came to North Carolina. West Africa is beautiful. It’s definitely not what they show you on T.V. I was so surprised when I came to America and saw the people’s views of Africa. I was like, “Wow, I never knew that was how they viewed the continent. People thought we didn’t have clothes, shoes... I’m like, “Wow, yeah... we have cities.” So, I don’t know, it was very surprising how when you live in Africa, you view America with such a grand view. So, everyone wants to come here. It was like a Disney World kind of view. But, yet here the view of Africa is the complete opposite. It was like, “Wow.” People mostly viewed it as wars and AIDS and people without clothes... I’m like, “No, that is so far from how it is.”

I would definitely say that I had a good childhood growing up there. The Gambia is very peaceful and one thing is that the African communities are much closer than I see in Western communities. So, it was a very close-knit community. It was a very nice, good childhood, but the problem we had is that the economy sucks. So, every opportunity people have, they will leave to find a better future because the economy sucks, really.

What could be done in your view to change that?

I think time. I think a lot of people don’t realize that we are young countries. My country, The Gambia, got its independence in 1965 from the British. So, until 1965, the British were ruling over us and I’m not pointing fingers, but when we took control in 1965, there was very little development done in the country. We were not in the position to compete with the global economy. You know, the world had become a global economy a long time ago and we were not in the position to compete.

Just to give you an example of this, The Gambia had its first president in 1965 and he goes into the development process and he even builds the first sewer system capable of handling flushing toilets. Our capital city didn’t have a modern sewer system capable of handling flushing toilets until the 1980s. So, here we are colonized until 1965, and those that colonize you never considered even building a sewer system for the capital city - not the country - the capital city, to have flushing toilets. So, we got in that process of catching up and I think it’s just a matter of time. And also good leadership, The Gambia has had only three presidents. We go every five years for an election, but the second Gambian president became a dictator. So, then he also takes us backward because dictators are more concerned about themselves than the country. I think all of this is a part of a nation’s growth. The country literally is fifty-four years old since independence. In the sense of a country, that is very young.

So, I am optimistic that things will get better. Many Africans I’ve met here have a similar mindset of going home and helping their countries when they have the opportunity. I see this big push to doing that. There are some other West African countries that are doing that already.

‍So, moving to North Carolina, then, what was your most surprising moment?

There was a lot of change. One was the view, there was the shock of how we are viewed compared to how it actually is, and just the culture, the friendships and so forth in school. It was very different than it was back home. Yeah, just the interactions... it’s hard to explain... the culture... I guess that closeness that existed in the communities back home. Here, it’s very much more individualized if that makes sense. So, that was a big surprise. But, without a doubt, the United States offers a lot more opportunities than The Gambia. I mean, you cannot even compare it.

It is a very individualistic nation. What were some of the opportunities that coming here offered you personally?

There’s a level of higher education I achieved here that I could not have achieved in The Gambia. In The Gambia, I would say, we are good until high school. After high school, the universities and so forth are not that great because you know those cost money. And a nation that’s going through its development phase can’t afford really good universities and so forth. Coming to the States the ability to take my education and career further, The United States definitely opened opportunities for me that I wouldn’t have had in The Gambia.

What was the most significant part of your education?

I sound like a nerd, but I am a person that likes learning. When I went to NC State, I went for civil engineering. I never finished. I had like a year to go, but I loved learning how things work. Civil engineering was a perfect field to allow me to know how all these forces work on objects. I was telling my wife, if I was to live forever, I would probably just go back to school and learn different things because I like taking in knowledge and learning how things work.

What drew you to civil engineering initially?

I’ve always been good with computers. I went to Durham Tech and I took computer classes there, and that came so very easily. So, I started a very small side business building computers and websites on the side for people. So, I decided, you know, I want to look at something that I can take back to The Gambia, and computer science at that moment wasn’t that big... because you know we didn’t even have proper electricity. You can’t even run servers when you don’t have electricity twenty-four hours a day, so I looked into civil engineering because I know in the sense of development that it’s something we needed and still need. So, that’s why I went into that because I was thinking that one day I can go back and use what I learned to help the country.

That’s an interesting concept though... if we could live forever, what are the things that we would do without a time limit?

There’s a website I used to love reading. I haven’t done it in years now. It’s called How Stuff Works. They do a great job explaining different aspects of our world and how things work, from engineering to finance, and I used to just love just staying on that website and browsing.

What drew you to Cognistx and contributing as a Developer?

So, in the past when I had my side business, I worked with Pete, (Pete Minnelli, SVP Creative), occasionally. He’s out of Chapel Hill and I worked with him occasionally. My wife and I did a year of traveling around the country, just driving around the country. When I was on that trip, Pete contacted me to do some contract work for Cognistx. When I did the contract work, I think he and Sanjay liked the work I did and they offered me a position to come on full time rather than a contractor. By then, my wife and I had traveled for almost a year and our finances definitely weren’t looking good, so I took the opportunity as soon as it came and I’m happy I did.

We’re all happy you’re here. What’s the best piece of advice you can give our readers who also have big dreams and want practical tips on how to achieve them?

Pursue your dreams. Don’t let others do anything to distract you. You know your dreams. You know your vision of what you want. Just go after them. It’s not always going to be easy going after what you want, but if it is what you want, just keep pursuing it. There are always going to be obstacles, whether it’s school, it could be finance or whatever it may be. There may always be obstacles, but always keep trying to pursue it and find ways to fulfill what you’re after.

Francis has a blog about his year long trip around the country. Check it out at www.travelsinliberty.com​.