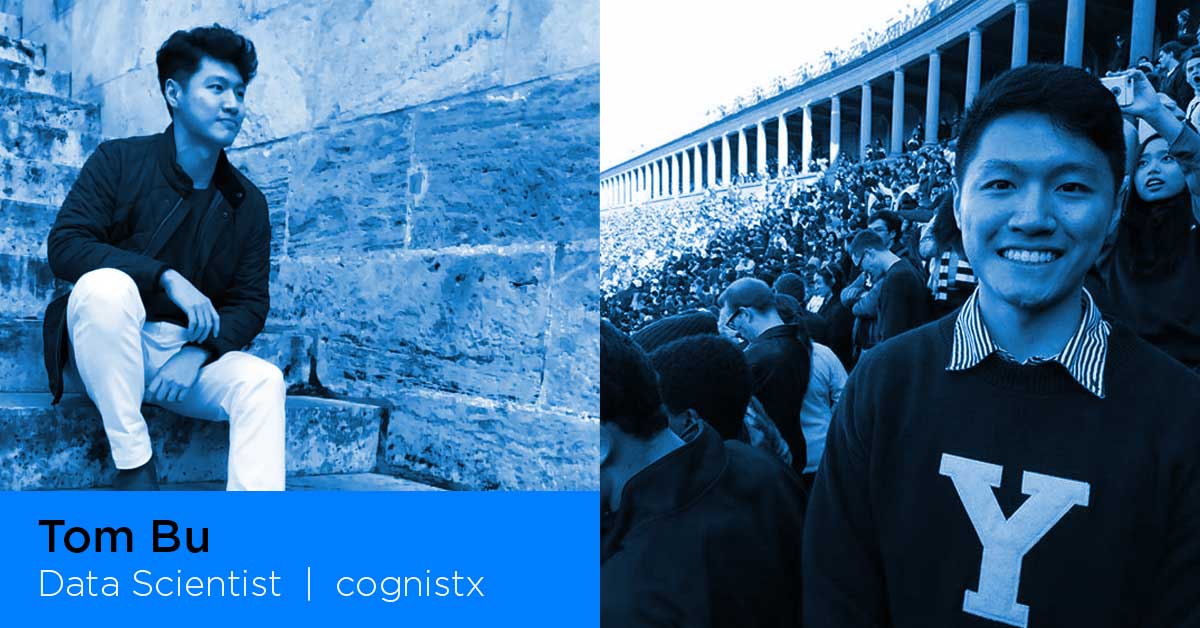 Holly Weaver and Tom Bu chat live during the pandemic of 2020 about the future of Artificial Intelligence.‍

Holly:  First off can you tell us a little bit about yourself and what you do?

‍Tom:  Yeah, sure.  So, I graduated from Yale University with a Bachelors in Biomedical Engineering.  It’s a surprising field to come from, but it’s a very interdisciplinary one, similar to Data Science.  I come to Cognistx from Nashville, Tennessee, where I was born and raised.  At Cognistx, I do general data analysis and predictive modeling, and I have an interest in computer vision.‍

What was your journey to becoming a Data Scientist?‍

I think after graduating, I definitely did some self-learning with a lot of the resources that are available online.  My Bachelors in Biomedical Engineering gave me a good foundation, so I was able to pick up some of the stuff relatively easily, but afterwards I think I was able to develop a lot while at Cognistx and learn my way through the field on the job.‍

Why did you choose to study at Yale?‍

I think at the time... if I were to put myself back in high school… I wouldn't have thought too much about it because I just expected them to have a very high foundation in all different subjects, so I didn’t really question it so much.  But I think looking back, Yale does a really good job at encouraging you to develop an expertise in one area, while also pushing you to explore other unfamiliar areas.  Like the liberal arts education.  Even though I graduated with a Bachelor of Science, I had to fulfill distribution requirements by taking Humanities classes, like Psychology or other Social Sciences, such as Anthropology.  Even though I would have been able to qualify to not take any language classes at another university, I was still required to continue taking some languages.

I didn’t realize until after getting there that Yale has a really great language program, so I studied both Chinese and Japanese while I was at Yale.  They have these great summer programs that let you go to the country and continue to learn in a native setting.‍

Can you tell us a little bit about your college education?‍

In Biomedical Engineering, as I mentioned it’s pretty interdisciplinary, so it grabs topics from some of the other traditional engineering backgrounds, such as Materials Science, Chemical Engineering, Electrical Engineering and Mechanical Engineering.  All of them are very data-driven, so I built that up in college.  I was doing a lot of research in Translational Medicine, particularly Drug Delivery.  Through that research I was able to learn a lot.‍

So, it’s developing the vehicles or capsules that helps the drugs that you ingest get to its target site.  I was particularly focused on brain tumors. Currently, it’s very difficult to ingest the drug and for the drug to reach the brain due to a blood-brain barrier.  The blood-brain barrier is what keeps foreign objects from getting into the brain.  It’s helpful that way, but it’s also a painful task for drug developers to get the drug where it has to go.  Basically, the field of drug delivery tries to help the drug last longer in the body’s system and help it localize to a specific area by adding certain ligands to the outside that would help it bind to the target site easier.‍

Did you feel accepted at Yale while attending?‍

I think Yale has a very diverse group of people, so even if you may be different from ninety-five percent of the group, you’ll have that other five percent which is enough to feel pretty accepted.‍

Were you involved with extracurricular activities?‍

Yeah, I was one of the elected officers for the Yale Running Club.  I organized social events.  Some events were internal, some were mixers with other clubs, such as the Swimming Club.  The Swimming Club was a club that my roommate participated in, so that was easy to coordinate.  There is an annual Harvard / Yale football game where each school goes to the other school every other year, so I also organized some of the Harvard / Yale Running Club runs during those weekends.

“There is so much more that I think AI can do to save lives, as well as benefit society.” - Tom Bu, Cognistx Data Scientist

‍Are you still a runner?

I try to, but I haven’t recently.  Under normal circumstances, I do go out for a run.

How has Covid impacted you personally?

Running was on the top of the list.  Before Covid, I was actually going to the park to run, but then I kind of like stopped just for precautionary measures.  Covid has definitely put a damper on any social activities that I was involved in.  Even meeting friends is a little difficult these days.  Previously, I attended weekly library events and those have all been canceled.

What were the weekly library events like?‍

The Carnegie Library of Pittsburgh is a great organization and contributes a lot to the local community.  Many volunteers organize events there, and some of the events I attended included Japanese language events.  Native speakers living in Pittsburgh would volunteer their time to help translate or teach classes, or even hold conversational events, which were helpful.

Which was your favorite event?‍

I really enjoyed the conversational events because learning a language isn’t useful until you are able to apply it in a social or daily setting.  Being in the U.S., it’s very hard to have those opportunities to use a second language unless it’s English.

What are some of the podcasts you listen to?‍

NPR's Marketplace was the first podcast that I started listening to.  I just listened to it everyday at the end of the day.  Robinhood has a really great daily podcast called Snacks Daily.  It’s pretty fun.  It is less serious than Marketplace, but it’s still very educational and tech-driven.

With Snacks Daily, they call every episode a T.B.O.Y., which stands for The Best One Yet.  It’s hard to pinpoint one episode, because it kind of comes in as news.  There is another one I got into called Acquired.  They have more storytelling podcasts.  They invite a couple of guests over to discuss one particular company.  They go back to the history of how that company is created, how they were eventually acquired, and how they went public.  That’s a great one to listen to if you’re on a long road trip.

Did any of the companies stand out to you?‍

I actually really enjoyed the one about Square.  I can’t remember the story completely, but the founders wanted to give access to a lot of local and small shops the ability to make these credit card transactions.  It was definitely an interesting story to hear about.

How has the stock market been impacted by AI?‍

There is definitely an interest in people who have an AI background to develop some software in finance.  You can definitely notice it for example when the S&P 500 is going down, everyone else will usually be going down with it.  So it makes the stock market in sync across the board, and I think that could be influenced by AI.  Also, AI is able to incorporate news at a faster speed than humans can.  Just like tweets from the President or any other event, you can see the stock market reflect those new events almost instantaneously.

What types of stocks are you watching closely?‍

I think the one I’m most interested in is Nvidia because it’s so interconnected with AI development and research.  That is one I have been following for quite some time.

What are some future technology ideas that have the potential to change our world?‍

I’m really interested in autonomous robots.  With the current situation, that can really help in ensuring everyone’s safety, like contactless robots and self-driving cars.  You see AI helping a lot of people with driving, such as crash detection.  Like for my car, if I’m driving too fast, but there’s a car in front that has stopped, it will actually alert me, and that has been useful.  Like the sensors on the cars, like if you’re backing up or something and you’re getting close to the wall.  Those are some of the early-stage AI in driving.  But there is so much more that I think AI can do to save lives, as well as benefit society.

How do you see AI impacting you personally?‍

There are a lot of applications people use today without realizing that it’s driven by AI, such as Zoom, when you have a background.  I’m not too sure about the technology, but they do some sort of background subtraction with some AI models.  It’s quite decent, but I’ve heard other people say that there can be some improvements in their AI.  There’s also the YouTube recommendation system, that are all AI-driven.  It’s certainly helped me find new songs that I like or the next logical video I should watch if I’m watching some sort of tutorial.  There’s also Google Translate, which has been really helpful in learning languages.

What songs have come up that you’ve saved or listened to a second time?‍

There’s a song called Marigold.  Sometimes I’ll listen to Japanese songs that I can’t understand, but this has been a really popular song in Japan as well.‍

What challenges did you face in becoming a Data Scientist?‍

The novelty of data science was definitely a challenge.  Data science is kind of a new field.  I think when I graduated, that year they had just developed a new Data Science Major at the university, so that shows how novel the field is.  Also, the definition of being a Data Scientist is very broad and it can actually mean very different things across companies.  If you break down AI, you’ll have Natural Language Processing, Computer Vision, general Machine Learning… so that kind of feels like a moving target sometimes and can make it difficult to find a suitable role.  There are also companies that have vastly different credentials that you have to meet, from a Bachelors to a PhD., so I think that was a challenge too. ‍

Are there any charities that you’re passionate about?‍

The Museum of Chinese in America (MOCA), it’s based in Chinatown in New York.  I did a spring internship there.  They do a lot to teach the local community and the general public about the Chinese-American experience in the U.S. as well as the history that Chinese Americans had to go through. It’s worth checking out if you ever pass through New York.